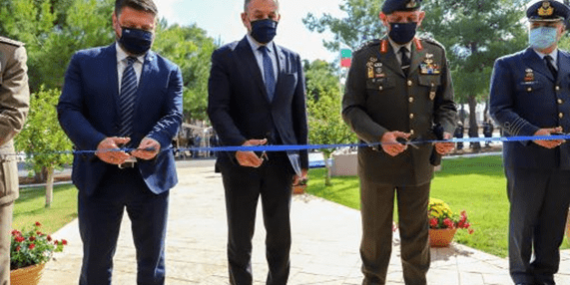 Inauguration Ceremony of Integrated Air and Missile Defence Centre of Excellence (IAMD COE) as a NATO IAMD COE was held under the auspices
of the Minister of National Defence of Greece,
Mr. Nikolaos Panagiotopoulos on October 19th, 2021, at Souda AB Chania-Crete.

ATTENDEES AT THE CEREMONY WERE:

From Framework Nation; The Hellenic Republic:

From sponsoring Nation; The Republic of Bulgaria:

From sponsoring Nation; The Czech Republic:

From Sponsoring Nation; The Republic of Turkey:

In his speech, the Director of IAMD COE highlighted that the Centre was established as an international organization on 8 April 2020, with the signing of an Operational Memorandum of Understanding (MOU) between The Hellenic Republic as the Framework Nation (FN) and The Republic of Bulgaria, the Czech Republic, Romania and The Republic of Turkey as Sponsoring Nations (SNs). On the same day, the participating nations established their relationship also with the Supreme Allied Command Transformation (SACT), by signing a Functional MOU. There were four milestones for the IAMD COE:

2.         The accreditation visit by ACT/COE Program Development Branch Director, on 21 October 2020, which was successfully completed.

4.         Its activation as a NATO Military Body (NMB) and the granting of international status under the Paris Protocol, by the North Atlantic Council (NAC), on 25 January 2021.

Since then, IAMD CoE has dedicated itself to its responsibility, which is to serve as an integrated air and missile defence expertise hub in order to support NATO and Nations transformation and operational efforts through support and enhancing the development of the Alliance`s, Sponsoring Nations`, and Partners` integrated air and missile defence capabilities in accordance with the NATO IAMD Concept.             During the ceremony all the precaution measures against COVID-19 were followed.